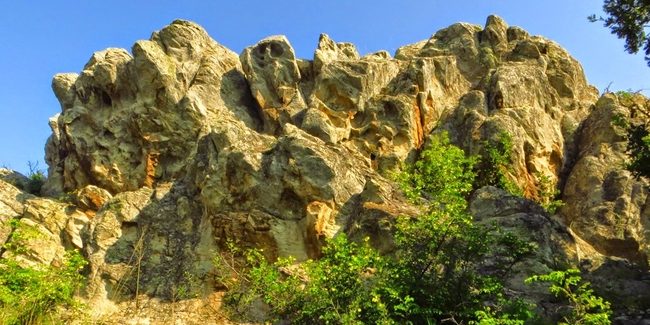 Thracians left thousands of tracks in our land. Part of their mystical temples, sanctuaries, tombs and other constructions have been solved, others remain a mystery to this day. You can spend your life walking around Bulgaria in search and detection of signs left by our ancient ancestors, but one of the places with the highest concentration of such is undoubtedly Sakar.

We are somewhere in the southeast, in no man’s land.

Between Sakar and the Dervent Heights. Between Bulgaria and Turkey. The place is located near the village of Melnitca, Elhovo. Here the rocks were cut more than 200 mysterious circle – for 6-7 km in the hilly area there are separate groups of highly visible rocks. If today you just woke up in adventurous mood, you have countless opportunities to explore and play Thracian culture.

What were the rock cuts used for?

Scientists still disagree about the function of the circles. According to one theory they are sunny and sanctuary symbolize the solar disk itself. Unlike other similar sanctuaries however, the part of the circles are south facing and lit by the rays until afternoon. According to another theory, it is chromium (ancient manual grinder for grain, which consists of two round stones), but the rock is too soft, to be able to be used for such an activity. The truth we may never know.

Stones circles are easy to reach. The first group – Mochukovi stones, has an established eco path “Dranchi dupka”. Coming by car from Elhovo, walk through the village of Melnitsa and continue in the direction of Lesovo 2-3 km after Melnitsa on the right side of the road begins eco path “Dranchi dupka”(there is a sign), after a few hundred meters on a leveled ground you will reach Mochukovi stones.

Look carefully, climb, peek to discover the Thracian rock circles. The area is beautiful, suitable for picnics, and if you have time, you can walk the path from the village of Melnitsa to the ecotrail on foot – there is no traffic on the road and you will reach it in about 20 minutes.

Melnitsa Village is located 15 km from the town of Elhovo. The trail is flat and easy, suitable for children. There are arbours, no water. Before you get to the circles, there is established platform for bird watching. If you get on it and wait patiently, you will see interesting types of birds flying just under your nose.

Stefan Veda
17:18 16 Jan 19
We made a booking through their website which was confirmed via e-mail. Upon arrival at the hotel it turned out that it was closed and nobody was there. I called them but the woman on the phone couldn’t speak English. A friend translated to me that she said they are closed and she does not see any booking. We felt that they were unprofessional and irresponsible. After all this caused a whole chain of trouble for us, as we had an appointment and had to quickly find and take another hotel, where we had to accept many compromises...

Tiina Kangas
13:53 24 Jul 17
Stunningly clean and sanatory-like hotel with a lot of modern technology. Friendly staff. No material in English.

Branko Dimitrijević
04:19 14 Jun 17
If You like very peacefull place this Is ideal. Far in village, You Can hear only bird songs, and rooster sometimes. There Is a Nice poplava, biliard, table tenis, bicycles, terains for futbool and basketball. Staff Is very pleasent. Beds soft and comfortable. Paying with cards possible, breakfast Is OK. Everything spacious. In bathroom should install additional shelf for cosmetics
Next Reviews
Go to Top