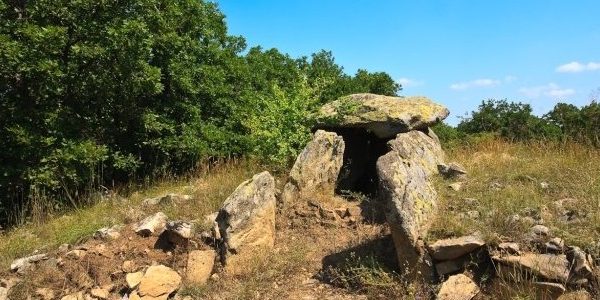 The most significant findings descended from the time of Ancient Thrace in Elhovo definitely are two dolmens that are treasured in South part of the border village of Great Dervent. They were examined in 2005 and in 2007 by Deyan Dichev and by the team of Archaeological Expedition “Strandja”, under the direction of the famous Bulgarian archaeologist Daniela Agre.

The dolmens are megalithic structures built from a few large natural stones or from roughly shaped stone slabs that are set vertically and covered with another stone slab. Ancient Thracian tribes used them mostly for funerals of high-ranking representatives of the tribal aristocracy and for related religious rites.

Similar megalithic structures are treasured in Western Europe and the Caucasus. In the Balkans they are found only in the Eastern Rhodopes, Sakar and Strandja Mountains.

The most widespread dolmens are unicameral, but rarely occur also bicameral. Both types could be with or without entrance passage (dromos). The larger of the two dolmens near Goliam Dervent was examined in 2007. It consists of two chambers and dromos (entrance passage). It dates back to the IX – VIII century BC.

To explore both unique dolmen near the village of Goliam Dervent you need to go through the border fence between Bulgaria and Turkey. They are located in the buffer area between the two countries. There is not a special permit required for visiting them. There are marked pedestrian pathway and indicative boards starting from Goliam Dervent up to the dolmens.

According to Daniela Agre this is the largest dolmen discovered in Thrace up to now, and the fact that its dromos (entrance passage) to the burial chamber is covered is a very unusual architectural decision. A particular attention deserves the fact that among 800 dolmens known in Bulgaria, Turkey and Greece this is the only one where the front plate is decorated with embossed figures: two snakes, labrys and a maze.

Labris (double ax) is the ancient symbol of the royal power and authority. Later it became the symbol of the Odryssian Royal Dynasty. The Odrysses created the most powerful Thracian political organization in the second half of the I millennium BC.