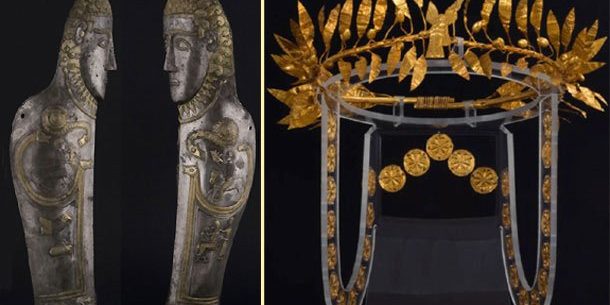 In 2005, Grand Mound – part of the necropolis, located between the villages Malomirovo and Zlatinitsa, both near Elhovo, was discovered untouched ruler’s tomb.
Thracian ruler, who lived around the middle of IV century BC, died at the age of 18-20 years. In the tomb was buried its full military weapons – iron sword makhaira 200 bronze arrows, spears 7, braided iron armor, bronze helmet halkidksi type.One of the most valuable findings is silver kneepad covered with gold with images that present late deified Thracian ruler and scenes from Thracian mythology.

The head of the deceased was placed magnificent golden crown, and on the little finger of his left hand – solid gold signet ring.  On it is displayed the Great Mother Goddess, which served the king’s horseman Fiala – mythological scene familiar from other Thracian monuments. As burial gifts were placed two silver and four phials rhytons. Rhytons with deer head modeled accurately. At the top of one Riton are presented two griffins attacking a bull (scene “Torment”), and the other Riton – two young warriors with spears and dogs killing a wild boar (scene “Hunting of wild boar”). All protruding parts of rhytons are gold plated.

The ruler was wearing leather shoes, and they are opened for the first time in Thrace, they are a type of moccasins. At his feet were placed two sets of silver beads and two metal reins and near It found various containers of metal and ceramic, and albastron alabaster. With numerous magnificent burial gifts the tomb near Malomirovo – Zlatinitsa is one of the richest rulers graves of IV century BC, found in Bulgaria.

Interesting: Very interesting are the rituals that are performed during the funeral of the Thracian ruler. Over the grave is placed a wooden frame on which are stacked stones. In them were defeated five ceramic vessels, probably full of food. This ritual is called Trizna. During the funeral there were sacrificed two horses of the ruler and his hunting dog. Described a religious moat 2.5 meters deep, which encircles the mound. It found fragments of amphorae bones of horses and dogs sacrificed. These rituals lasted about 10 15 years after the death of the king.